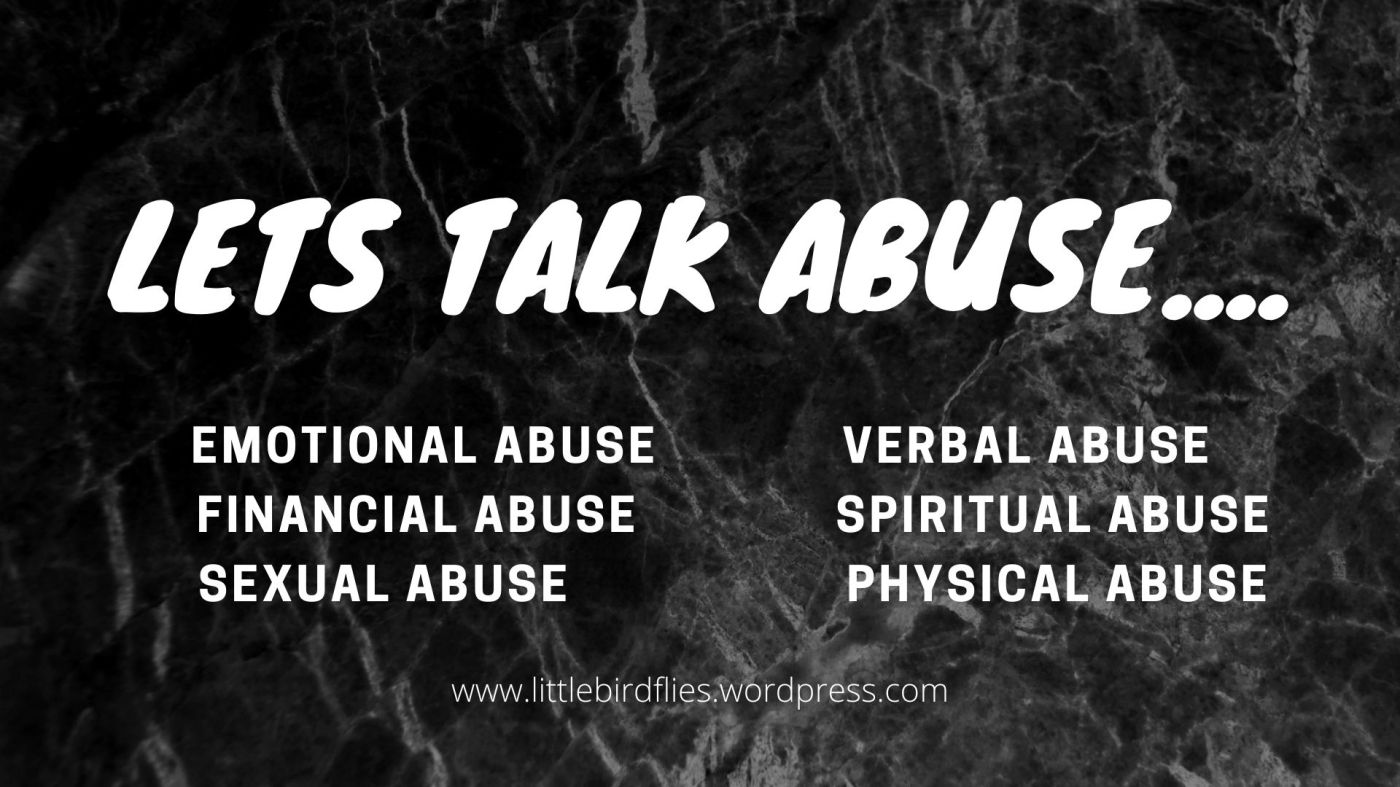 There are 6 primary forms of abuse. This blog post will briefly explore each one and shed light on how it is used by an abuser to maintain power in a relationship.
Abuse is intended to create a control and power imbalance in your relationship. Abuse creates an environment of mistrust, tension, violence, and chaos. We hear all the time about physical abuse. I stayed in my marriage for years because he never hit me. I didn’t realize that abuse almost always begins verbally and emotionally.
Abuse is used to break the victim down. It is purposely used to hurt you, keep power over you, and make it impossible for you to leave. Abusers don’t abuse all the time. They can go hours, days, weeks, months, and my case even a year before they choose to abuse again. During the ‘non-abusive’ times, they are often charming, kind, and engaged or, at least, they seem to be. This phase is sometimes called the ‘honeymoon’ phase however, the abuse hasn’t stopped. The abuser is simply using manipulative kindness to maintain control and is also using forms of abuse that are not physical.

This sets him up to get his needs met by you. He uses threats, guilt, shame, humiliation, teasing, and other forms of non-physical violence to control you. Once he has power and control over you in the relationship, he is positioned to manipulate and abuse without being held to account.

Verbal Abuse is added in pretty quickly to an abusive relationship. Verbal violence often goes hand in hand with emotional violence. Abusers use words to break you down, change your mind, make you give up, and believe the lies that are told to you and about you. It is wielded like a sharp sword directly at your deepest hurts. It causes open wounds to your soul that is long-lasting and difficult to heal from.

Verbal abuse is insidious. It creeps in first with comments that are 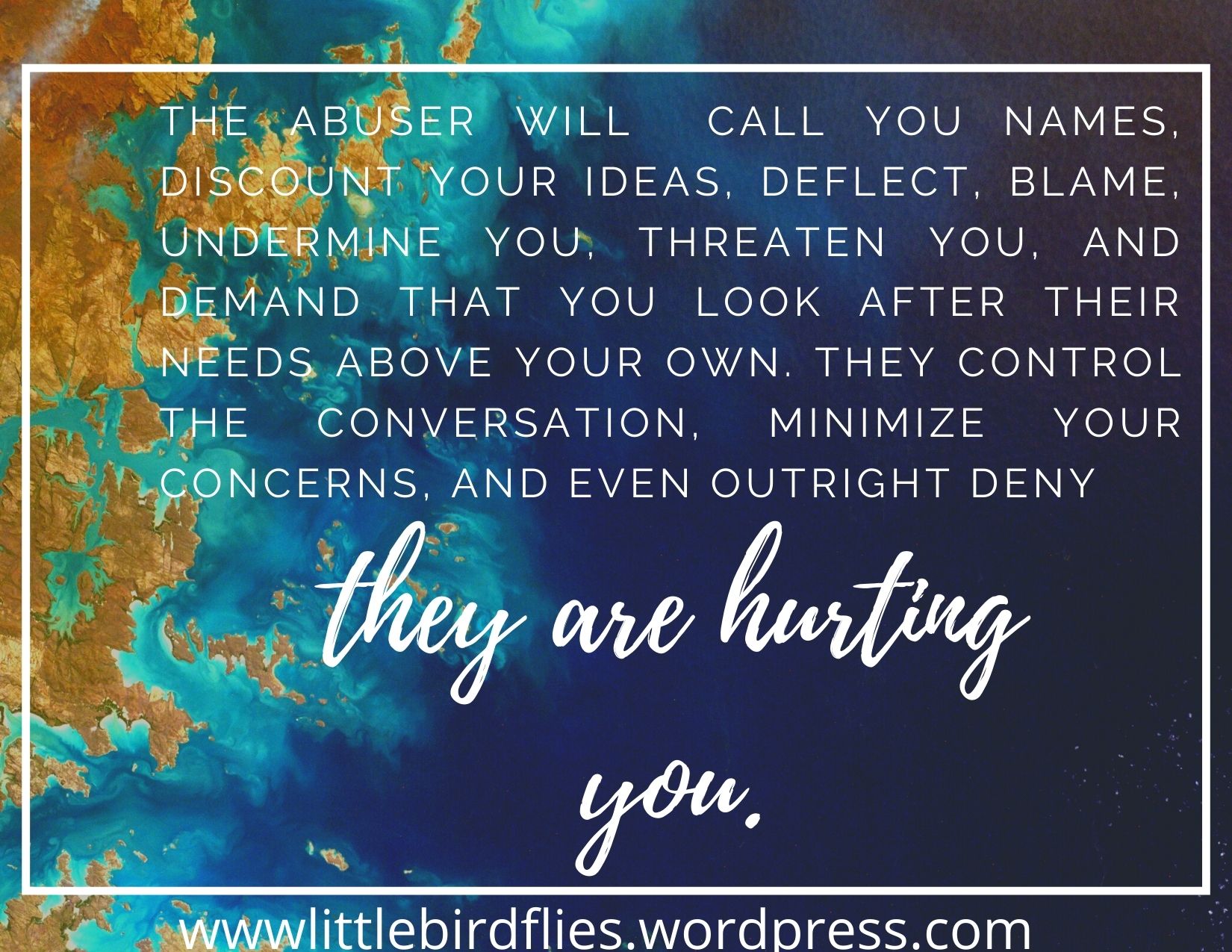 explainable, words that seem innocent, and even loving but are manipulatively calculated to control you. It is similar to being boiled like the proverbial frog who doesn’t realize its danger until its too late.

The abuser will call you names, discount your ideas, deflect, blame, undermine you, threaten you, and demand that you look after their needs above your own. They control the conversation, minimize your concerns, and even outright deny how they are hurting you.

Verbal abuse is designed to make you doubt everything you know about yourself. The abuser loves you and cares for you so their words are confusing while you grasp for ways to rationalize their behavior. The verbal abuser is a bully and having to constantly defend or explain your beliefs, actions, words, thoughts, and opinions is exhausting. Verbal abuse is as harmful and painful as physical battering, he just uses his words instead of his fists.

Financial abuse makes it easier to control another person’s actions. The abused partner may have to ask for and defend every single penny they spend. Requiring financial accountability, however, is only directed at one partner and does not apply to the abusive partner who often spends whatever and whenever they want to.

Financial control enables the abuser to do whatever he wants without being easily caught or held accountable. A financial abuser will take your money, put you on a strict allowance, prevent you from working or going to school. They may run up debt in your name, require to sign financial agreements, leave you off of important paperwork, or even refuse to work themselves so you have to be the sole provider.

They will force you to make financial decisions and then blame you for making those choices. They will accuse you of stealing. They won’t let you get a job and if you do, then you have to pay for all your household expenses. Financial abuse in abusive relationships is the leading cause of female and child homelessness. Financial abuse keeps the victim tied to the abuser as they can see no way of getting out or supporting themselves once they leave.

Spiritual abuse is an attack on a victim’s spiritual life, beliefs, sense of morality, and values. An abuser will use scripture and holy writings to back up what they are demanding from their partner. He will manipulate not only the holy writings of her religion but also her religious community.

He sets high moral or spiritual expectations and then abuses her when she cannot meet those expectations. He’ll tell her she must suffer for Christ,

submit to her husband in all things, remain quiet and meek. She’ll be told to forgive and forget, pray for her partner and try harder to be a better wife to save her marriage.

He will go to great lengths to befriend the pastor and elders, bishops, rabbi’s and leaders of their religious community. He can then control the public opinion of his partner by manipulating what her community thinks about her thus beginning the smear campaign. The smear campaign sets the community up to turn against her if she tries to ask for help. Spiritual abuse slowly undermines her relationships and reputation within the community therefore essentially cutting her off from any spiritual support she may have had.

Spiritual abusers and enablers believe that every marriage should and can be saved. They believe that abuse is not a valid reason to seek a divorce but may require a time of separation for safety reasons only. The victim feels shame, and guilt because they cannot fix their marriage or relationship and this may lead to them staying in a dangerous situation longer than they should.

Sexual abuse is very difficult to talk about even though Sexual abuse happens often within dating and marriage relationships. Sexual abuse takes place whenever one partner pressures or coerces the other partner to participate in any unwanted sexual activity. A marriage license does not take away an individual’s right to bodily autonomy, or their right to consent.

Marital assault and rape is a reality that many people within religious settings try to deny. However, if a partner is forced to participate in any sexual act without their consent, regardless of marital status, it is assault or

rape. Even though marriage should be a safe relationship, it often is not when one person is abusing the other. An abuser sees it as a relationship of ownership. He owns you, your body, and your soul (he thinks). He will cross all boundaries to get his needs met while he disregards yours.

According to the Rape, Abuse and Incest National Network, there are three types of marital rape:

Other forms of sexual abuse and assault can include the following:

We don’t like to talk about marital sexual abuse, but we need to understand so we can help ensure the safety of victims.

Physical abuse is sometimes but not always obvious, and unfortunately, the one kind of abuse that is the most recognized in our society because it is the one that leaves physical, noticeable bruises, wounds, and scars. Few abusers start a relationship by hitting their partner. Most people run away from a relationship with that person if that were the case. Abusers must get a victim to accept the other forms of abuse, creating trauma bonds, and reliance on the abuser before they can safely begin to physically abuse their victim.

Physical abuse often begins, not with hitting and punching, but with 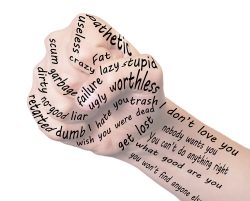 Studies show that once an abuser verbally threatens to kill his partner, places his hands around her neck, or intimidates her with a weapon, her risk of being murdered increases dangerously. If a victim has experienced any of these forms of physical violence she must reach out for help. A conversation with the national domestic violence hotline is a first step to making a plan that will keep you safe. In the USA (800.799.SAFE (7233) or http://www.thehotline.org)

Even though an individual may exhibit an abusive behavior once, it does not make them an abuser. Abuse is an ongoing pattern of intimidation, coercive control, and manipulation that helps one partner maintain the primary control and power in a relationship. It is a continuum of behaviors that often escalates over time, getting worse and more dangerous until the abuser changes his belief system, the victim leaves or is murdered.

This blog is a brief overview of the 6 primary forms of domestic abuse. It is important to understand that there are many ways that an abuser carries out each of these forms of abuse. The abuser’s goal is to maintain power and control over his victim and he feels entitled to reach that goal in whatever way he chooses. Abuse is never the victim’s fault and speaking up to break your isolation is the first step to finding safety, security, and peace.