I am excited to share with you the 9 abuser types that Lundy Bancroft talks about in his book “Why Does He Do That? Inside the minds of angry and controlling men”.  Lundy tells us that most abusers are a combination of 2 or more of these types.

Rambo has taken the macho message to an extreme. Nobody benefits from our societies messages about what it is to be a man’s man. Those messages promote violence and degradation of women. Rambo, uses these messages to his advantage. He inflates those macho messages to justify his stereotypical beliefs about male patriarchy and superiority.  He justifies his abuse by these messages as well. (Messages our boys and men (and girls) receive and believe can be found here )

Rambo is physically intimidating and violent. He thrives on disrespecting women. He presents himself as superior to all, but especially women and to those who he decides are ‘weaker’ or ‘unimportant’. He especially dislikes anyone from the LGBQ community and anything he perceives as homosexual . He has especial hatred for anything feminine as well.  He thinks that compassion, kindness and patience makes him weak and these attributes are feminine…what in turn is what makes women weaker. He cannot show fear, grief or loving emotions. These emotions make him vulnerable and that is not tolerated.

He enjoys creating fear in others. Intimidation is a favorite technique of abuse that he will use.  He believes that if you are weak then you deserve to be afraid, picked on and hurt. He is the text book bully. He views women in the stereotypical way in that the woman’s place is in the home, serving him. His gift to you is his protection of you from the evil outside world. His protection will turn on you eventually and he’ll be the one from whom you’ll need protection.

He will seem like a strong protector at first but soon his winning, loving and protective ways turn into jealousy, controlling behavior and violent outbursts. Although, he believes it is his job to protect you and a man should never hit a women, he believes even more strongly that he must keep you in line at all cost. If that means that he must hit you then that is the priority and you are asking for it. His disrespect and hatred of women paired with his love of violence and intimidation make him a ticking time bomb in your relationship. You are owned by him and you are his trophy.

I think it is important to note that not all men who are physically strong are Rambo’s. There are many men who are strong, lift weights, participate in stereotypical ‘manly’ ventures who are decent and upstanding men. These men respect women and are secure in being a man. Rambo has a very specific set of beliefs that he backs up with his violence. Watch for someone who is violent and intimidating toward anyone. Someone who defines their manhood in stereotypically inappropriate ways, who justifies his violence toward others and you have yourself a Rambo. Often, they will have a criminal record which of course wasn’t their fault. They may also show signs of being a sociopath or psychopath. 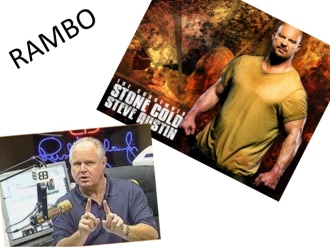 What the Bible says about Rambo:

Zephaniah 1:9 In the same day also will I punish all those that leap on the threshold, which fill their masters’ houses with violence and deceit.

Malachi 2:16-17 “I hate a man’s covering his wife with violence, as well as with his garment.”

James 1:19,20 Wherefore, my beloved brethren, let every man be swift to hear, slow to speak, slow to wrath: For the wrath of man worketh not the righteousness of God.

Psalms 11:5 The LORD trieth the righteous: but the wicked and him that loveth violence his soul hateth.

Taffy is a survivor, victim advocate, writer, and speaker. An ordained minister, she has extensive training in the field of Domestic violence advocacy backed up by a BS in Human Services. She is passionate about reaching victims with the truth of God’s love and His desire for their emotional health and freedom. Taffy is a mom to 4 amazing teenagers! They enjoy traveling, rockhounding and adventuring together. She is enthusiastically living life and shares her story freely, including the hard topics. She is a native-born Canadian who loves coffee, her 15 ducks, and traveling. Taffy works as a legal DV advocate, homeschools, writes, speaks, and in her time off, she takes a nap. In the process of building H.A.V.EN., a non-profit organization to help victims fleeing abusive relationships, she is often asked to speak to churches, organizations, and women’s retreats. View all posts by LittleBird